Where To Drink In Calgary

In 2014, while researching where to go for drinks in New Orleans, I came across a decision tree that helped me decide where to go. I said to me, “I’ve got to make one of these for Calgary.” Just in time for Stampede 2015, I released a Where to Drink in Calgary decision tree.

It has proven very popular. It has had some 30,000 views on Imgur, where I had initially posted it. Probably even more impactful, it has continued to be posted on people’s Facebook pages and sent around by e-mail. To this date (writing in Jan 2016), I still hear from friends that they just got the tree in their e-mail from family and friends. So it’s still making the rounds.

I’m working on turning it into an app. Until then, here’s the image version. I’ll be making changes, corrections, and updates as time goes. Below is the most recent version (which for right now, is also the 30,000-view version). 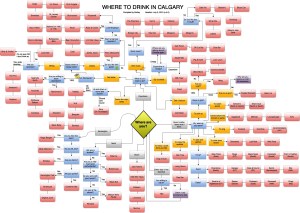 Where should you go for drinks in Calgary? (click for full size)

We have had three sell-out years in a row. We’re planning new and wonderful things for 2016, and are in the planning stages to be able to officially announce it very soon.

Long neglected but still intended for development is my personal blog about my family’s genealogy. Johnealogy is something I plan to return to in 2016. I have a big binder of information that was put together in the 1970s and 1980s by Cyril Morris. He had asked in the family history he wrote that it should be passed on to future generations. I plan to transcribe his typed notes into a modern digital format and present it (with living persons information redacted, as it should be) for cousins known and unknown to build from.

Before Christmas of 2015, The Drop In Centre, a homeless shelter in Calgary, published a wishlist of items that their clients had asked for. Checking out the list, I saw that many of them had listed “mobile phone” as their wishlist item. “I can’t be the only one with four retired phones sitting in a drawer doing nothing.”

I took to social media and collected as many phones as I could. Five days later, I was able to deliver 18 working mobile phones to The DI. I still have another ten-or-so which require varying degrees of help (unlocking, broken screens, etc.) before they can be passed on.

It occurred to me that this isn’t a Christmas-only need. Many working homeless or want-to-be-working homeless require a cell phone for such simple things as applying for jobs. Add the benefits of having a phone in order to stay in touch with family, or just to stay safe, and this is likely a year-round need that’s not confined to just Calgary.

I intend to create a national initiative for collecting retired phones and delivering them to homeless shelters and other agencies that service the at-risk population. I have no idea how that is going to work, exactly. But on my goals list for 2016, I have this project. I suspect I’ll need the help of major telcos, so if you know someone in the executive offices of one of them who you think would be interested in this, I’d sure appreciate an introduction.